Today I flew Sydney to Vancouver with Air Canada. In short, an easy and relaxed flight. My stay in Canada is all too brief; just a day and a night, as I am here to meet up with my Encounter Travel , Canadian Rockies & Alaskan cruise group. They’ve just come back from a 12 day tour of Canada. Now, we all head off on the Alaskan cruise tomorrow, departing Canada, one way to Seward, Alaska. Stay tuned, there will be more on that in the coming days. I took the chance to flight test Air Canada as it’s the first time I’ve had the pleasure. 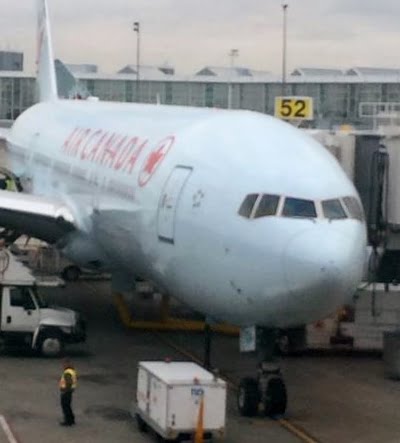 THE ROUTE
Sydney to Vancouver, direct

MY TRAVEL CLASS
Economy. For AUD124 you can purchase exit row seating, subject to availability of course. I tried a few months before my flight but it was already taken.

TIME IN THE AIR
Fourteen hours and fifteen minutes. Departure was spot on and so was arrival, so can’t complain about that!

THE SEAT REVIEW
I was in 38C . There are just two sections for the economy seating separated by the toilet block in the middle. My seat was in the 2nd section in about the middle. Economy seating is a total of 228 seats and is a 3-3-3 layout. Business class is configured as 1-2-1 seating with 42 seats.

BAGGAGE
One checked-in bag up to 23 kilograms (50lb) with total linear dimensions per bag of 158cm (62in). For bags overweight between. Overweight bag: $100 CAD/USD (per direction) for bags between 23-32kg (50-70lb) a fee of $100 CAD/USD per direction applies. My bag was 400grams over but they let that slip and I wasn’t charged extra or asked to redistribute items to hand luggage. For carry-on bags you are allowed 1 standard and 1 personal article up to 10kilograms each. As an example of what classifies as standard or personal article they are: carry-on bag, roller bag, backpack, briefcase,laptop computer, airport shopping and duty-free purchases, sport racquet (e.g. tennis, squash, badminton), camera bag, garment bag (size and weight restrictions apply), musical instrument. The overhead storage was very spacious; deep and high.

COMFORT FACTOR
Before my flight I thought that the exit seat’s additional legroom would have been nice but I have to say I was perfectly comfortable in my standard economy class seat. I am 166cm so I don’t suffer leg room issues. The young man beside had very long legs and still had good space between his knees and the seat in front of him. Overall the economy class cabin had a sense of spaciousness and I felt that seat width and pitch for economy class was generous. The head rests that bend back and forward also helped make it easier to get some sleep with the head support.

INFLIGHT ENTERTAINMENT
Air Canada’s ‘EnRoute’ in-flight entertainment is on demand. It is a personal touch screen TV on the back of the seat in front of you that’s easy to use. Earphones are handed out but the crew encourage you to use/bring your own on the basis of being environmentally conscious. I watched a few episodes of a Canadian business program (pretty entertaining, about innovations) and also was glued to the screen and managed three movies; A Winter’s Tale, The Face of Love and Bad Words. ‘EnRoute’ also has flight maps and music options.

THE SERVICE
It was a friendly and efficient service. There was no delay in getting the drinks service out after the captain turned off the ‘fasten seat belts’ sign after take-off. Throughout the duration of the flight, the flight attendants were regularly up and down the aisles offering bottled water poured into cups. They also put out a basket of pretzels near the flight attendants’ service area as a ‘help-yourself’ offer.

ABOUT THE MEALS
We left at 10:20am. It was a full service flight with three meals during the flight plus a little pretzel snack with the drink for the first drinks service, before our first meal. First up was a hot meal with two choices. I had the beef bourguignon with rice and very tasty carrots. The beef was tender and enjoyable. The other choice was chicken and mustard dish, with a serve of pasta. The also had a fresh side salad with a strawberry of all things included and a tasty serve of dessert which was a carrot cake. Then there was a second meal/snack, followed by breakfast.

My only criticism of what was a very comfortable flight was the poor snack/second meal offered. It was a bread roll that was not fresh, nor tasty with a slab of processed turkey and cheese. However I enjoyed the Tim Tam that came along with it. The final meal service, breakfast was somewhat average; the three slices of fruit as a side was good; fresh and testy. However the boiled sausage that I think was chicken, with an egg omelette, that was unusually yellow, was not enjoyable. The topping of tomatoes and potatoes on the egg omelette was a welcomed addition.

ABOUT THE ARRIVAL
The airport was decidedly quiet. It almost seemed that maybe we were the only arriving flight. Clearing Canadian customs at Vancouver International airport was almost immediate, bags were already on the carousel and clearing customs could almost be missed it was so easy; just a case of handing over the customs declaration card, without a queue and then through to the arrivals hall. Taking a taxi to downtown Vancouver was a ‘piece of cake’. Just 20 minutes in the taxi with a friendly driver, happy to share some local tips for tourists and local information and all this for just thirty-one Canadian dollars and a few dollars tip.

THE VERDICT
Probably one of the easiest flights I’ve taken for a long time ; the comfort of the seats, friendly service and I think the fact that it’s a morning departure all combined to make for an easy flight.

Want to join the discussion?
Feel free to contribute!