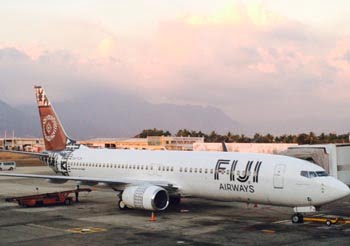 Yesterday I returned with Fiji Airways from Nadi to Sydney. It was a work trip; I was meeting up the Encounter Travel Fiji Resort Escape group for a week of frivolities. I took the chance to flight test Fiji Airways as it’s the first time I’ve flown with them. On previous visits to Fiji I’ve flown with JetStar and Virgin Australia. I was curious to experience the third option for Australians for direct flights to Fiji.

It was just over one year ago that the airline rebranded from Air Pacific to Fiji Airways.

THE ROUTE
Sydney to Nadi, direct

THE LOYALTY SCHEME
Fiji Airways is a partner to the Frequent Flyer programs of Qantas, Alaska Airlines and American Airlines and Qantas Airways. When you fly with Fiji Airways, add your frequent flyer number to accrue points on eligible fares.

FLIGHT MANAGEMENT & CHECK-IN
You can manage your booking using their website ‘Manage your Booking’ option.

Unlike the growing trend for airlines to charge a fee to request preferred seating such as the exit row, Fiji Airways does not offer this service. The exit row and bassinet seats can only be confirmed at check-in and are subject to availability.

The check-in at Sydney was delightful. There was no queue and the Fiji Airways representative could not have been more friendly or nicer. She also offered me the exit seat which I was happy to take. The other nice touch, I found out when chatting to my neighbours on the flight, was the champagne they were offered when they announced at check-in they were on their second honeymoon after marrying in Fiji 10 years ago.

There’s 156 seats available in economy with a seat pitch of 32” and a 6” recline. I was in the exit row, in seat 23C on my flight from Sydney and for the return flight a standard seat in, 17C and both seats were aisle seats.  There’s just one section for the economy seating with business class up front, separated by a curtain from economy.  Business class is configured as 2-2 seating and they are not flatbeds.

BAGGAGE
One checked-in bag up to 23 kilograms (50lb) with total linear dimensions per bag of 115cm (45 inc).  Business class has a limit of 30 kilograms.

Passengers are allowed one carryon bag at a maximum weight of up to 7kg (15lbs) and one small personal item such as a laptop or purse.

The Fiji Airways website advises that:
A piece weighing more than 30kg (66 lbs) will not be accepted as checked baggage, and will either need to be re-packed as separate piece or sent as Freight. Any piece exceeding the total dimensions will be charged the oversized/bulky item fee. Any item exceeding the weight of 23kg but less than 30kg will be charged excess baggage rates.

COMFORT FACTOR
The comfort was good. The head rest had adjustable sides so you could rest your head easily and get extra support. The evening flight included a pillow and large blanket which covered me from top-to-toe (I’m 166cm tall). The seat pitch was comfortable.

INFLIGHT ENTERTAINMENT
In economy, they had small overhead screens at intervals of every three rows. There was no seat back screens for inflight entertainment.

THE SERVICE
It was pleasant enough service but I have mixed feelings about the standard.  On the flight over the meal service was slow to commence, after the captain had switched off the ‘fasten seat belts’  but on the return flight it was fast.

Throughout the duration of the flight, the flight attendants mostly went unseen except for attending to passenger call buttons. Compared to some other airlines that offer water regularly, this was a bit disappointing. I like to have water available, so my review of this does get down to a personal preference. For others, this would not be an issue.

If Duty Free is something you like to do on board you need to request it. On one flight it was not announced and on the other it was only mentioned it would be available after the meal service but that was the only reference to the service.

ABOUT THE MEALS
There was one main meal served with an option of two choices; a meat dish and a vegetarian meal. On my flight to Fiji it was lunch and I opted for the vegetarian curry which was very tasty but the portion size was small, if I compare it to other airlines. On my return flight it was a dinner service with the option of a chicken bolognese pasta which did not look appetising. The vegetarian meal was a pasta along with something else but I could say what it was and the flight attendants did not say what it was either. It was fine but unfortunately nothing memorable.

For each meal there was a side serve of a small salad and a small cake and a drinks trolley also at the same as the meal service.  Following the meal service tea and coffee were offered.

It would have enhanced their service if they offered an inflight snack (nuts or pretzels) and perhaps another trolley drinks service on the longer return flight, Nadi to Sydney.

ABOUT THE ARRIVAL, FIJI
Step off the plane and instantly you know you are in Fiji. It’s warm and you are greeted by Fijian musicians playing Fijian music with friendly smiles. It’s a stand out from most airports and a great tradition that I hope they continue.

Nadi International Airport is the gateway to other domestic destinations in Fiji, such as their islands and of course for all international arrivals. It’s a simple airport that doesn’t appear to have been renovated for a long time however it serves its purpose and it’s an easy process of clearing customs and collecting your luggage.

At customs you will be handed a small paper slip to keep with your passport that is handed back on departure.

Another stand out is that they have Fijian baggage handlers at the security check, so that once you’ve collected your luggage they do all the lifting of your luggage to go through the security scan. It’s nice not to have to lift your own heavy luggage onto the conveyer belt and I think just another example of Fiji’s warm hospitality.

When arriving to Fiji it’s best to have your transfer service organised in advance. There’s a few different transfer services. I’ve always used TTF www.ttf.com.fj and it’s always been an easy process to book the transfer.  Once you clear customs you enter the basic arrivals hall with a small offer for food purchases, bathroom facilities and shop fronts for some tourism services including the transfer services.   Continue walking and look for a transfer representative as they are usually standing in the arrivals hall or otherwise find the shop front for the service (TTF have a shop front).  One point to note; once you are in Fiji you are on Fiji time; service slows down. My recommendation; relax and move into Fiji time. If you are on a shared transfer rather than private they may wait for other flights before leaving the airport so it’s not always a quick departure.

Where the speed limit is 80km, you will find the drive is a relaxing pace.

THE FREQUENCY
Fiji Airways operates a twice daily, direct flight from Sydney, Australia to Nadi, Fiji. On Saturday there are three flights.  They also have direct flights from Melbourne and Brisbane to Fiji but not the same frequency as the departures ex Sydney.  For departures ex other capital cities they code-share with Qantas.

THE VERDICT
The comfort of the seats is good but only a few stands outs to make it memorable; the easy and friendly check-in service and one flight attendant on the return flight who had a wonderful disposition and lovely smile always. Would I fly them again? Well, probably, yes but only if the fare was no more than other options.

Cruise Review; Voyager of the Seas
Scroll to top