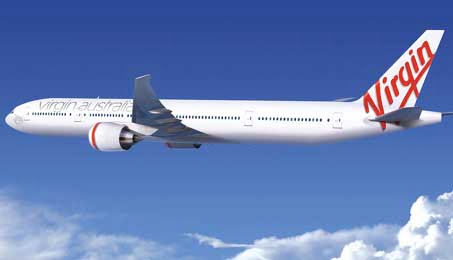 I joined ‘Mayan Magic, Mexico & Guatemala’ tour for solo travellers. I flew with Virgin Australia, Sydney to Los Angeles, before making my way to Guatemala City on a Delta Airlines flight direct from Los Angeles.

I’ve flown Virgin Australia internationally before, a few years back, Sydney to Abu Dhabi. There were a lot of similarities and no surprises, which I say as a good thing. I was hoping it was going to be as enjoyable as I remembered from last time, and it didn’t disappoint.

THE LOYALTY SCHEME
Virgin Airlines operates their own loyalty scheme called, Velocity. When you fly with Virgin Australia, add your frequent flyer number to your booking to accrue points, on eligible fares. If you are flying with one of their partners you may also be eligible to earn points towards your Velocity membership.

VIRGIN AUSTRALIA CODESHARE PARTNERS
It means you have access to a large network of flights when you book with Virgin Australia with access to their partner flight routes, like Delta Air Lines, Air New Zealand, Etihad and the list goes on.

I arrived to the queue for check-in about 2 hours and 45 minutes prior to the flight departure time. It was a reasonable queue and the wait to check-in was about 20 minutes. As I’ve always experienced flying with Virgin domestically, it was the same with the international flight check-in; the representative at the check-in counter was friendly and welcoming.

TIME IN THE AIR
From Sydney to Los Angeles, it’s a scheduled 13 hours and 50 minutes. We pushed back from the gate, just ten minutes after the scheduled time. Our arrival was about 10 minutes earlier than the scheduled time, so in fact, we caught up some time.

Keeping in mind I am reviewing the comfort factor as an average sized female, with a height of 166cm (won’t be giving away my weight however), the comfort was good. The head rest had adjustable sides so you could rest your head easily and get extra support. The evening flight included a pillow and large blanket which covered me from top-to-toe (I’m 166cm tall). 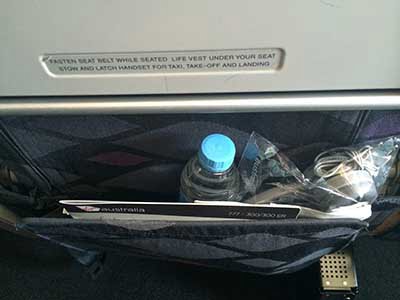 When you board, there’s an eye mask & pen already on your seat (but no inflight socks). Also, the earphones are much better than before.

The cabin design, fresh trimmings, cleanliness and colour scheme also had to the sense of comfort and space.

Total seat capacity for the flight: 361
There’s 288 seats available in economy with a pretty standard arrangement for seat pitch, recline and width:

Business class is up front (turn left when you board), then premium economy and then economy (turn right)

Checked Luggage:
For economy, it will depend on your fare class and Velocity member status, so check your ticket. It’s either one or two pieces, up to 23 kilograms (50lb) with total linear dimensions per bag not exceeding (length + width + height) of 140cm, per piece.

Carry-On:
For economy, international long-haul flights with Virgin Australia, for all guests it’s up to 7kg of carry-on baggage on board and not exceeding a total linear dimension of 115cm.

TIP: IF you have other flights on your trip, check their luggage limits, as this can vary airline to airline. In particular, internal domestic flights may have limits of 20 kilograms, or even less for small aircraft.

Known as ‘Red’, it’s the seat back in-flight entertainment system with 22.9cm (10”) screen. What impressed me was the range of movies and the number of recent releases. There was a choice of about 25 new release movies and so many other movies. Plus, there were TV series, games, music and the flight map. All operated by an easy to work out, touch-screen and handset control.

There was also their inflight magazine, Voyeur.

I didn’t use it, but there’s an in-seat USB port, as part of the in-flight entertainment system; a really handy feature if you’ve forgotten to charge a device (that has a USB charge connection).

THE SERVICE
It was a delightful service from the flight attendants (thanks to Emma, my flight attendant that I saw the most of). Emma had a beautiful smile throughout, and she has to have had the best red (‘Virgin trademark’) lip gloss I’ve ever seen.

It was an 11:40am, so lunch was the first meal served and breakfast was prior to arrival.

Lunch was better than I’d ever expect on an economy flight. I’d rate it as the best inflight lunch I can recall for an economy class fare. And, good on you Virgin Australia for offering three choices; a chicken cacciatore, braised beef and a vegetable lasagne. I took the vegetable lasagne option. Not sure how they did it, but the vegetables were perfectly cooked, when too often on flights meals just quite aren’t the same as on the ground. I like a vegetable lasagne when there’s just a tiny bit of crispness still left in the veggies and that’s just how it was. It was topped with a light cheese and cream sauce with breadcrumbs and layered with a fresh tomato sauce. It was accompanied with a small side, of a Greek salad and a white mouse dessert, crackers and a piece of cheese. 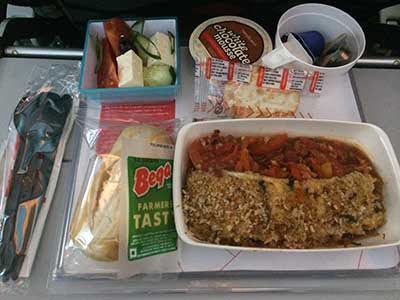 Breakfast, a choice of two; a vegetarian option and then a regular breakfast offer. The regular option included chicken sausages and scrambled eggs. I don’t think eggs can ever be done well with inflight meals and the chicken sausages have never been something that appealed….so, needless to say, I took the vegetarian option. It sounded unusual as I’d never thought of an Asian flair for hash browns. It was Thai inspired hash browns, baked beans and asparagus and it was pretty tasty.

Following the meal services, tea and coffee were offered.

If you get hungry on flights, there’s no need for alarm. There’s a mid flight snack; on my flight it was a ‘toastie’ with a cheese and tomato filling plus they keep snacks out; small packets of crisps and pretzels plus some soft drinks.

And, any airline wins me over when they put a bottle of water in your seat pocket before boarding so you don’t have the long wait between boarding and the drinks service once you’ve taken off. During the flight, jugs of water were available to either top up your bottle or fill a glass, plus the flight attendants came by a few times offering water.

ABOUT THE ARRIVAL, LOS ANGELES

Los Angeles International ‘Tom Bradley’ Airport (LAX) is the gateway to a mega network of flights across the states and onward international connections. On your flight, you are handed a US Customs and Border Protection form to be completed by each person, or one form for a family who live at the same address.

At Customs Control
When a flight has you arriving that equates to a body clock time of the wee hours of the morning, the customs and baggage procedure is daunting and I always prepare myself for a long wait. I was pleasantly surprised of how orderly it was to pass customs at LAX. The queue for foreign passports was probably only about 20 minutes and I was greeted with a friendly welcome from the custom’s officer (not my memory of the last time I passed through border control at LAX).

Collecting my luggage was as equally as painless, and before I knew it I was curb side, working out how to get my free hotel shuttle to my hotel nearby to the airport.

TRANSFERS
In the airport, signage is clear to direct you to the exits for taxis, rental cars and shuttle. Just look out for the sign ‘hotel shuttles’. Once I stepped out of the arrivals hall, then, I didn’t find which direction to walk for the courtesy hotel shuttles and had to ask. Had I have kept walking, I would have come across it. It was further on than where the taxis pulled in, so if in doubt, ask.

THE VERDICT
Excellent.  My review says it all. Would I fly them again? Yes, without a moment of hesitation.

A SIDE NOTE
My connection Los Angeles to Guatemala City was with Delta Airlines (partner airline with Virgin Australia) but the connection is not great; arriving at 6:30am to Los Angeles, then flying out just before midnight the same day. But, if you have the time, I think it works pretty well. Definitely get a hotel in Los Angeles for the transit time as the time difference meant I was feeling very flaky, shortly after arriving to the hotel. In my case, I winged it and booked the one hotel night only. I booked the hotel stay for the day I arrived. This meant that arriving at 6:30am, the hotel didn’t have to check me in until 3pm. I struck it lucky and was checked in by 9:30am. In hindsight I think next time I’d like to know my room was ready and I’d book the night prior. Remember also, to add a mention of your arrival time in your hotel booking. If you are arriving early it may help get an early check in or likewise if you book the night prior of an early morning arrival, then you don’t want the hotel thinking you are a ‘no show’.

MY LA STOP OVER HOTEL
I stayed at the Sheraton Gateway, Los Angeles. A generously sized room with a super comfy bed…..I was in heaven for the few hours of sleep I did get. The hotel has a Starbucks and A restaurant, and if you are up for it, the hotel is nearby to the public bus that can take you to Santa Monica for a bit of shopping time.

A Solo Traveller, interested in Mexico & Guatemala?
Check out my tour that I joined with Encounter Travel (which happens to my travel company).

Note: My review is subjective, based on my own experience and it does not give any guarantee that you will have the same experience or opinion as me.

My first appreciation for how important it is to have travel insurance was in my early days of backpacking and working overseas.I was working in the Austrian ski fields. It was Lech, where Princess Diana used to like to take her boys on ski trips. Some friends living in London at the time, flew over for a week’s ski holiday in Lech while I was working there.

On day one (unbelievable, I know) my friend Jeremy took a tumble down the slopes, wound up in the medical centre and was operated on that day for a serious ligament injury. He not only forfeited his ski holiday, but also was landed with a huge bill for the surgery and the special flight arrangements to get home. Fortunately Jeremy was smart, or at least his partner Vanessa was. She had purchased a travel insurance policy for the both of them for a relatively small sum before they travelled, and the expenses were all covered by this policy.

[As a side note; if you are taking part in active sports or adventurous activities, make sure that the insurer will cover you for these activities in the event of an accident.]